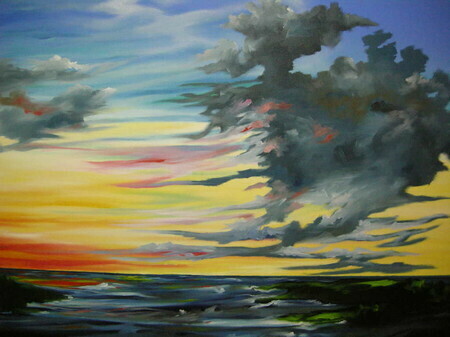 He who dwells in the shelter of the most high will abide in the shadow of the Almighty.

I will say to the Lord, my refuge and my fortress, my God in whom I trust.

For he will deliver you from the snare of the fowler and from the deadly pestilence.

He will cover you with his pinions and under his wings you will find refuge.

His faithfulness is a shield and a buckler.

You will not fear the terror of the night, nor the arrow that flies by day. Nor the pestilence that stalks the darkness

Nor the destruction that wastes at noonday.

A thousand may fall at your side, ten thousand at your right hand, but it will not come near you.

You will look with your eyes and see the recompense of the wicked because you have made the Lord your dwelling place. The most high who is my refuge.

No evil shall befall you. No plague will come near your tent.

For he will command his angels concerning you to guard you in all your ways.

On their hands they will bear you up. 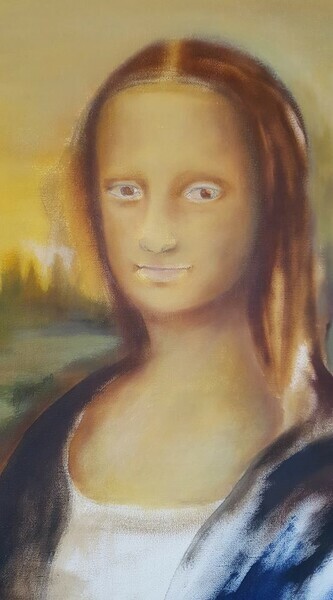 Today I worked on the eyes. Much much more to do, but some mistakes were corrected.

Sometimes I think I bit off more than I can chew.. 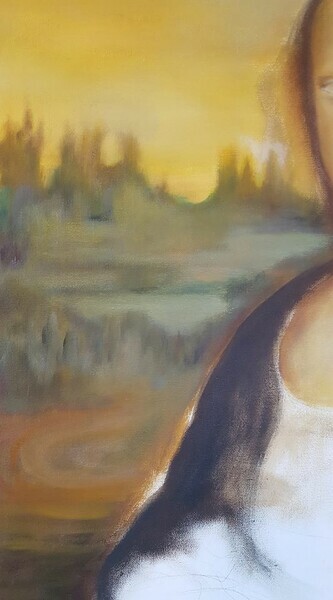 One of the hardest things has been the background. I managed to block most of it in today and hope to apply details later. Some of it I can't even make out - is it water? Is it a mountain? Is it a land mass? Jeesh. 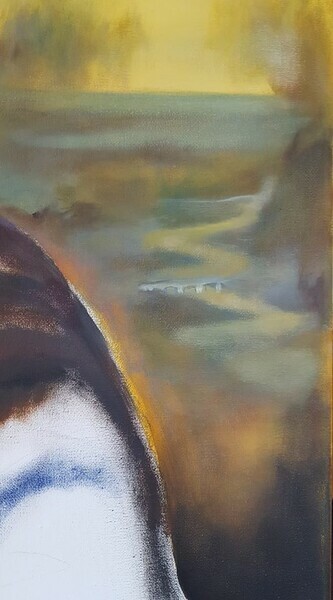 This is the right side. Did anyone notice a small bridge on the right side? I never knew this until I started painting the background. It is tiny, but somewhat pronounced. I'm guessing it has metaphorical implications..

The Value of Introversion

I've lost 3 friends in the span of a year and for this sensitive soul, the burns run deep.

What came from it was the realization that non-intuitive, focused painting like this keeps my mind from running in seven different directions, and reminded me how much I thrive on introversion.

The studio provides a dedicated space where retrospection is part of the process. Analysing sections of the painting, finding problem areas and devising a game plan.

Intentional alone time is crucial to focused painting and I highly recommend it.

Periodically through this project, I'll interject thoughts, musings and quotes from Behind the smile. 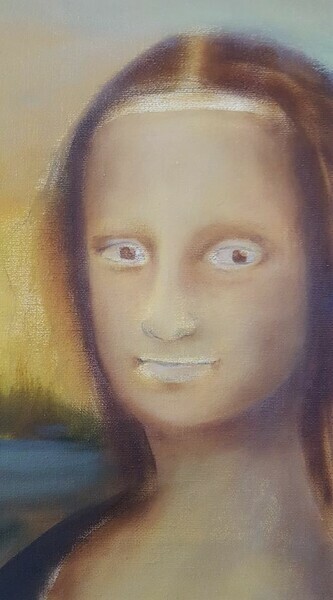 Built up the face tones a bit and slowly darkened areas of the hair. I have determined that the eyes are a little too far apart, but I'll attempt to remedy that by adjusting the corners of the eyes slightly. I'm using several reference photos to help me figure out the colour of her skin which is somewhat yellowy according to most photos. 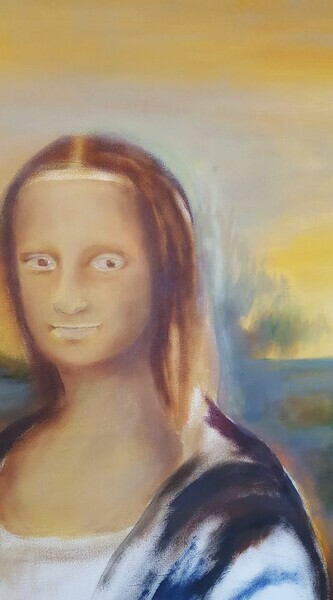 I encountered another issue when I started to build up the hair on the right side. I made her hair too full on the right. So I had to go in with negative space which forced me to continue work on the very challenging landscape features. This part will dry fully by next time and I can re-work the details later. 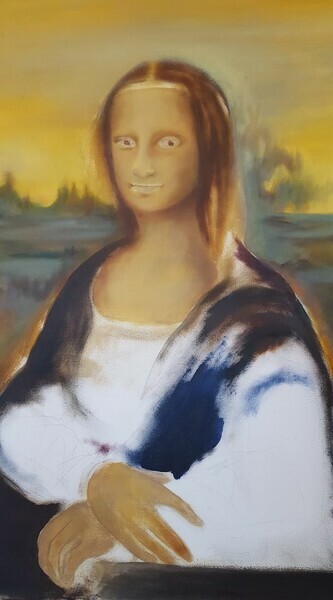 Overall, it is kind of ok. The trick has been to build things up in very thin layers. I have found my oldest scratchy brushes have been invaluable for sfumato blending. I've used only 3 brushes, and paint from leftover palettes so far which for some reason, is working pretty well.. 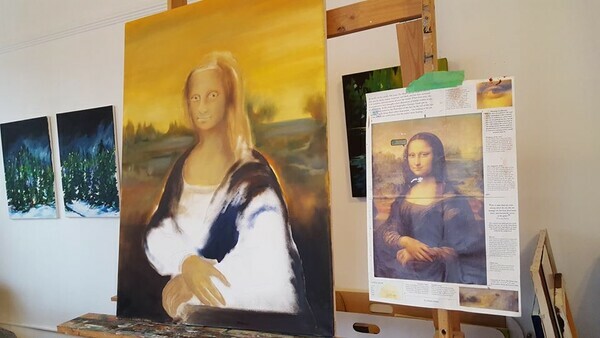 I built up the background a little more yesterday. Upon analysis, the weirdest landscape features I have ever seen, and way harder to replicate than it looks. I'll be glazing the sky with a grey blue especially toward the top so that it isn't so yellow. I also built up the negative space and some of her clothing. 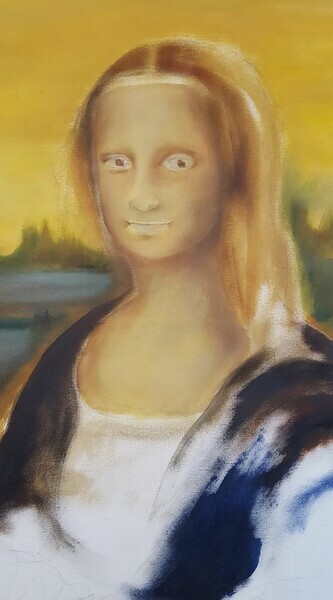 Worked on a few facial features and started to darken her hair in some places. 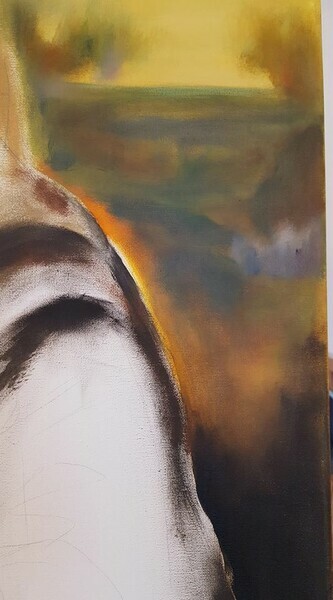 Background on right. I won't leave the shoulder glow, but I'm going to leave a hint of gold for as long as possible as I work in the landscape. I just like it for some reason. 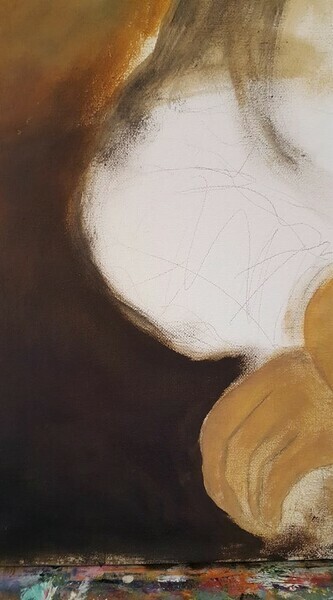 As well-meaning as people are, some folks are quick to point out problem areas and give their suggestions. While I very much appreciate feedback, it is safe to say that this is a challenging project that will take some time. Keep in mind that it's very early on, and I'm allowing one year to properly complete it. At this point in the journey, encouragement and questions would be awesome.

Thanks so much for taking the time to look! 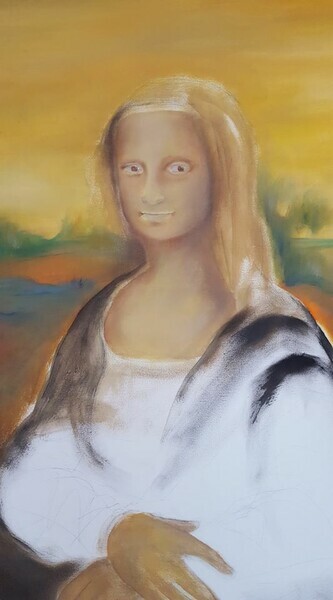 Background is harder than it looks. Landscape still needs a lot more depth and topographical details.

At this point she looks like Mona's beachy blonde little sister, Skipper.. 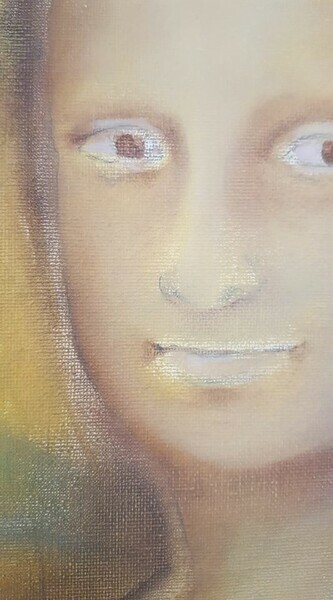 Worked on some facial features, much more work to do on eyes, nose lips..but it's a start. 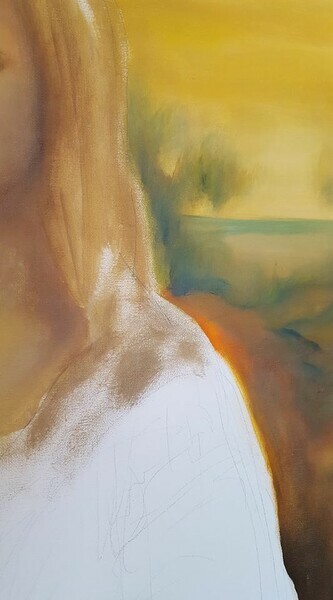 I enjoyed the fluidity of the lower right side so far. 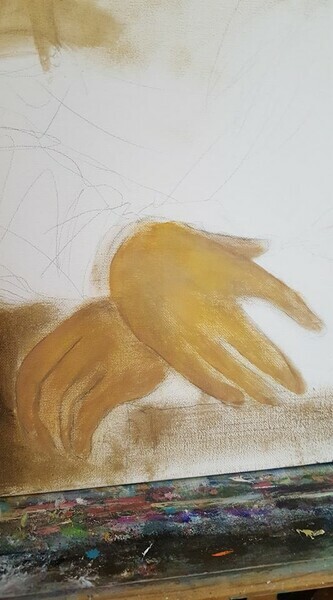 The hands blocked in.

Interesting to note that I l did not open a single tube of paint today. I literally only used leftover paint from 6 or 7 student paint palettes from Saturday.

just a thought I wanted to share because maybe others feel it too..

"So many feel lethargic, unmotivated, or worn out in this hemisphere. We are really not made to rocket straight through winter ablaze with energy. Look at nature. The ground, plants and animals are deep at rest. This is the natural way of things that God intended. Spend time with the long nights, the moon, the bare earth, solitude and stillness. Be easy on yourself." - Victoria Erickson 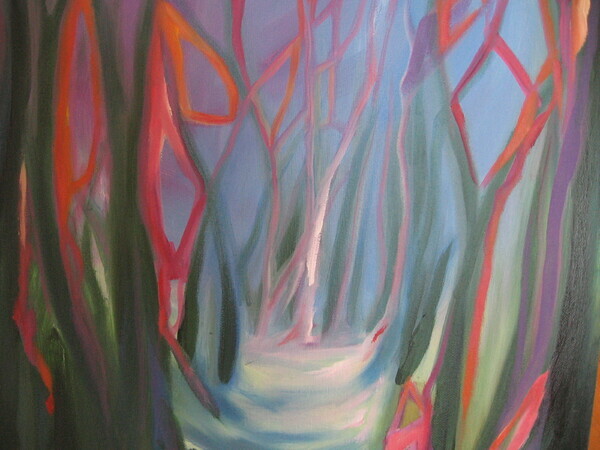 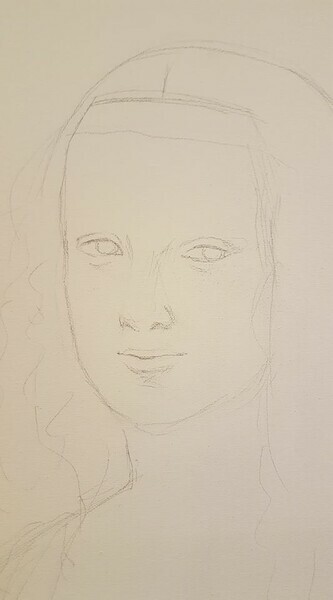 Day 1 - On the easel. A fairly quick sketch albeit a lot of erasing. The hands.. well, they are a real challenge. Almost to the point of giving up on the hands and covering them with some kind of improvised text or something. But I will persevere..

I laid down the first wash rather quickly and will continue next week. I'll also block in landscape details and begin eyes, nose, mouth. Go easy, this was only the first day. 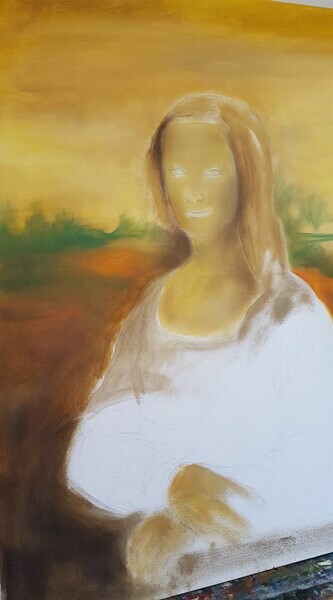 The hands are literally gonna kill me.. 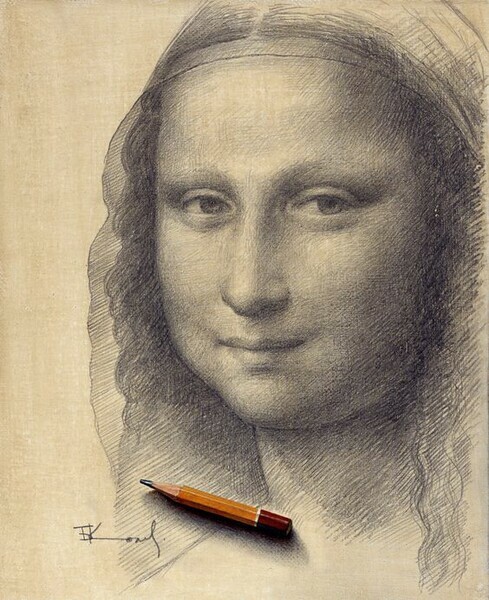 Thank you for following along on the 100 Days! It was so fun to find and curate the many faces of Mona Lisa.

Coming up after the holidays: I shall attempt to paint the Mona Lisa in oil and will blog the journey here. Please follow along as I post progress photos and various processes. I am not a portrait artist, and I have never painted a copy of a Renaissance Master, so I'm looking forward to the learning experience and challenge.

I have other projects I'm working on for 2020, including new Kleinwerks exhibits and an assemblage show in Abbotsford, so this will be a year-long endeavor starting in January. Let's see how far I get by next Christmas:)

Thanks for your support and check back soon. In the meantime, Happy Christmas! 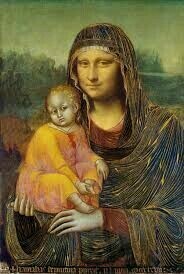 "..and His name shall be called, Wonderful, Counsellor, Prince of Peace, the Everlasting Father."