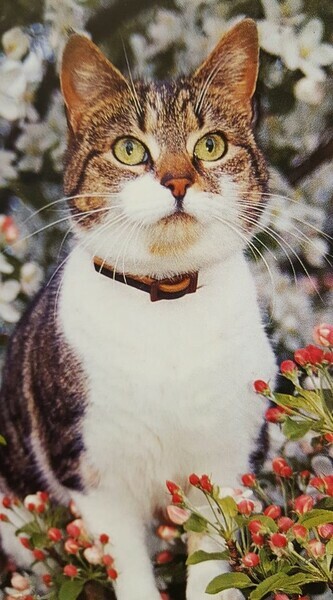 Misty(above)in the garden of her Rosedale home in Toronto. Misty is well-known in Canada as a painter and a performance artist. One of her recent paintings, Interring the Terrier, appears to show a small headless dog being stuffed inside a red armchair by two frogs and a sardine. The piece sold at auction for $21,000 Ca.

Image middle, the dense black verticals are over layed to suggest a series of interconnected forms describing the path of the leap itself.

Image right - Misty insisted that the stool be placed in position so that she could complete the upper curved form to her satisfaction. Many of Misty's works go "off canvas", and some go completely off the wall and onto the floor.

In part from: Why Cats Paint - A Theory of Feline Aesthetics